Minnesota and Dakota County played key roles in the history of suffrage.

In 1881, the Minnesota Woman Suffrage Association was founded in Hastings, Minn. to promote and obtain suffrage. Decades later, South St. Paul women became the first in the country to vote after passage of the 19th Amendment when they registered at the polls to vote on August 27, 1920. Newspaper articles covered this historic event, some even specifying Fox film corporation having crews on scene to get reel footage.

DCHS has spent many years trying to track down the footage of that day with no luck...until recently. Over the past five years, DCHS staff contacted 20-30 repositories attempting to locate the footage with no leads.  Suddenly, in March 2022, DCHS staff member Rebecca Snyder, and her husband David Schreier, were watching a PBS documentary on suffrage when they saw unidentified footage of Marguerite Newburgh.  Briefly, in a montage of various women voting, she was shown dropping her ballot into the ballot box.  Recognizing her dress and pose from the still photos of August 27th, this began another month-long task of trying to identify exactly who the footage came from.

With great excitement, we can share that the footage has been found and we have secured the rights to this footage.

**Please note, we are working to get these videos operable on our website. In the meantime, you can view the videos on our Facebook page (www.facebook.com/dakotahistory).**

In this scene, Marguerite Newburgh is seen posing with her ballot, before dropping it into the ballot box and walking to exit offscreen.

This footage has been hidden to the public, as those who held (and hold) it are unaware of its significance. We have secured rights to this footage for $1,500 and want to make it available to the public. You can find the very short clips below, as we continue to seek out the original footage that we hope, is much longer and shows more women!

If you would like to help offset the cost of obtaining this footage, you can make a contribution below. Any funds that exceed the $1,500 we paid to secure the footage will be used in future suffrage related events and in honoring women voters.

Women's suffrage in the United States began back in 1840 when Lucretia Mott and Elizabeth Cady Stanton were denied entry to the World Anti-Slavery Convention. The two were joined by Mary M'Clintock, Martha Coffin Wright and Jane Hunt to discuss the necessity for suffrage and what came from these discussions was the first suffrage convention. The Seneca Falls Convention was held on July 19 & 20, 1848 in Seneca Falls, N.Y. Here, Stanton presented The Declaration of Sentiments, outlining the fight for social, civil and religious rights for women. More than 300 men and women attended the event.

At this time, the suffrage and abolitionist movements were closely tied together. After the 1860s, focus turned to suffrage for both races. After passage of the 15th Amendment in 1870, which gave Black men the right to vote, the suffrage movements that were so closely connected, distanced themselves. Many white women believed they should be granted rights to vote before Black men. Despite the passage of the 15th Amendment, not Black citizens were met with discriminatory practices that impacted their ability to vote, primarily in the southern states.

it is important to also note that some women were able to vote in various locations throughout the country based on local laws. In some instances, suffrage was granted to women in select states and territories, or women were allowed to vote in the local elections. Suffrage continued to be fought for at the national level.

In 1924, Native Americans were granted citizenship, but still could not vote in Minnesota until 1960.  Asian American women were not able to vote until 1952, when the Immigration and Nationality Act granted them citizenship. African American women remained unable to fully vote without barrier until 1965 with the passage of the Voting Rights Act.

Locally, Minnesota has a deep and important connection to suffrage history.

In September 1881, a group of 14 women met in Hastings, Minn. to form the Minnesota Woman Suffrage Association. The group followed a national trend of suffrage organizations forming at what started at the national level, then trickled down to the state and local level.

The charter members are documented as:

When word came on August 26, 1920 that the 19th Amendment had been signed, women in the city of South St. Paul quickly began to prepare. A previous water bond referendum was reschedule for the vote to August 27, 1920, the day after the final signature was applied. With proper notice already given for the referendum, South St. Paul woke up early on August 27, 1920 to register, some waiting in line by 5:30 a.m. Nearly 90 women registered to vote that day in South St. Paul. There has been some discrepancy as to who the first woman to cast her vote was. As best we can tell, Miss Marguerite Newburgh is depicted in newspaper articles as having cast her vote first, then she took her role as election judge immediately after.

When voting on the water bond referendum, men and women voted in separate ballot boxes.   Not knowing if something would change in relation to passage of the 19th Amendment, by   voting in separate boxes meant that a new vote would not be required should the women's   vote need to be thrown out. Because of that, the city of South St. Paul has a count of the   vote in their minutes books, while the newspaper also recorded the vote by gender. 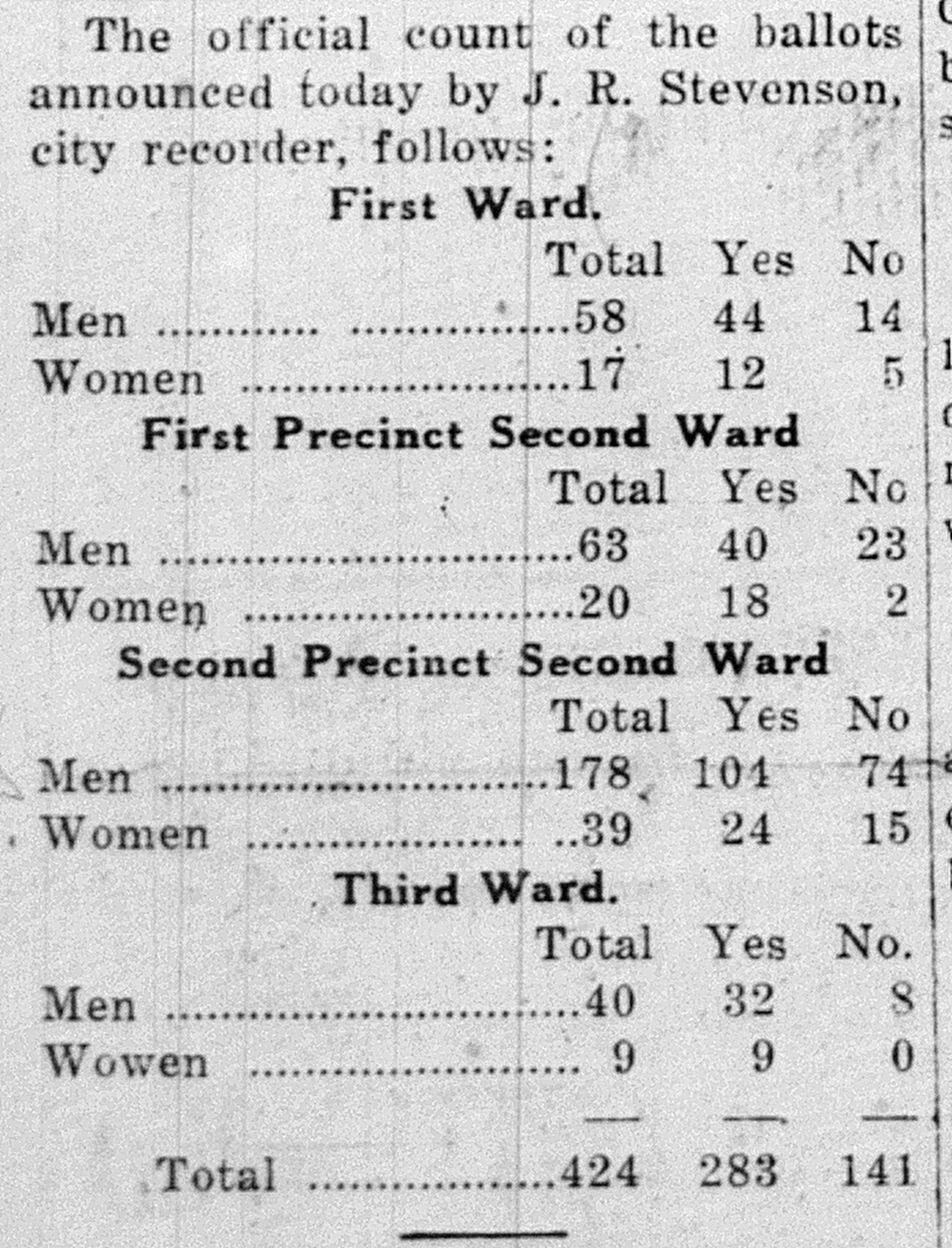 Not wanting to risk having to hold another vote, after a previous failed attempt, the votes for men and women were separate. This was done in case the Amendment was overturned, they could simply toss out the women's votes and count the men's. While we know today that this did not happen, it gives us a glimpse into how the women and men voted by precinct and ward.

This "first in the nation" event was recognized by a resolution passed by the Minnesota State Senate in S.R. No. 5, June 16, 2006.

In total, there were approximately 90 women that registered to vote. We have identified as many of the women as we could, mostly using newspaper articles. In some instances, they were identified as "Mrs. H. G. Stevens," based upon their spouse. This was not uncommon throughout history, but makes it much more difficult for us to track down the individual woman's name. In some cases we were able to, in others, we need a bit more research.

If you believe you had a relative that voted, please share the information with us and we will do our best to verify it and add their name to our website!

Here are the names we have been able to identify:

In 2020, to celebrate the 100th Anniversary, we worked with Twin Cities Public Television (TPT) to create a video short related to the history of suffrage in Minnesota and Dakota County.

The video was called "A Hundred Years, But Not Done Yet."